Eastern North Carolina School for the Deaf (ENCSD) has been serving deaf and hard of hearing students in Eastern North Carolina for over 55 years. ENCSD was established in 1964 after parents, friends of the deaf, and other citizens realized the need for another Deaf school in the eastern part of the state.

R. M. McAdams was elected as ENCSD’s first superintendent in October of 1963. His first duties included supervising the development of architectural plans, overseeing construction of the new buildings, and finding a team of staff. Construction of the school began in January of 1964.

Although construction was not complete in August of 1964, ENCSD was still officially ruled “open.” Seventy-two students, nine teachers and our principal, Miss Louise Harris, held classes on the campus of North Carolina School for the Deaf in Morganton, NC while construction continued at ENCSD.

On April 25, 1965, construction was finally complete, and classes began at the new campus in Wilson, North Carolina. There were a total of eighty-eight students from kindergarten through eighth grade. Once students graduated from eighth grade, they were sent to Morganton’s campus to attend high school. In 1977, parents at a parent association meeting discussed the need for establishing a high school at ENCSD. In 1979, Senator Dallas Alford and other legislators supported the idea to open a high school program and in August of that year, thirty-eight ninth graders started their high school career at ENCSD. In May of 1982, the first graduating class was presented by the Eastern North Carolina School for the Deaf.

To this day, ENCSD continues to serve children in grades K-12 from the 54 easternmost counties in North Carolina.

In 1963, the Eastern North Carolina Sanitarium Board of Directors offered a 36-acre plot of land to the ENCSD at no cost. This land was accompanied by two already-established buildings, which would become the home of the ENCSD. The ENCSD is currently located on 70 acres of land and houses the largest low-ropes course in North Carolina.

Woodard Hall was named in honor of Representative Tom Woodard who helped establish the ENCSD while a member of the General Assembly. This building was originally owned by the Eastern North Carolina Sanitarium. Since the ENCSD was a residential school, it was necessary to establish a medical facility for the students. The original infirmary was established on the second floor of Woodard Hall and consisted of a pediatrician, head nurse and practical nurse. Woodard currently houses our administrative and business offices.

Vestal Hall was named in honor of J.M. Vestal, a native of Raleigh, North Carolina, who was deaf himself. Vestal spent his life advocating for the welfare and education of children with hearing loss in North Carolina and he also served on the Board of Directors of the NC Schools for the Deaf. In 1968, an additional wing was added on to the original building. This wing added classrooms, dormitories with the capacity to serve 120 students, a gymnasium, a kitchen, and a dining area. Vestal Hall is currently being used for elementary and middle school classes, daily meals, and activities in the gymnasium.

Eagles Hall was named after Senator Joseph Eagles who was a spokesperson and advocate for the ENCSD. In 1963, the General Assembly appropriated funds for construction and equipment for a new, self-contained building on the ENCSD’s campus. This facility is a 52,000 square foot building with a capacity for 120 students. It includes 14 classrooms, boys and girls dormitories, a kitchen, a dining area, a gymnasium, and a self-contained library. It was the first “new” building on the ENCSD’s campus and was opened in 1965. In 2002, Eagles Hall was closed. All staff and students were relocated to other existing buildings.

McAdams Hall was named after Mr. Robert McAdams who had been the ENCSD’s superintendent since 1963. By 1967, the student population had grown so rapidly that the ENCSD requested money from the General Assembly for the construction of another new building. This new building would house an additional 120 students and come equipped with classrooms, dormitories, a library, a gymnasium, an auditorium, and an indoor pool.  Construction was complete and the building was fully occupied in 1970. McAdams Hall is currently being used for high school classes, housing for boarding students, and activities in the gymnasium.

In 2005, the gymnasium in McAdams Hall was named Williamson Gym in honor of Mr. James “Barney” Williamson, Jr. Mr. Williamson was a beloved teacher and coach at the ENCSD from 1970-1999.

Mayfield Hall was named in honor of Erwin “Tex” Mayfield who was a vocational teacher at the ENCSD for twenty years. Mayfield Hall was built in 1969 and housed the middle school pre-vocational training program. The goal of this program was to expose middle school students to a variety of vocational possibilities. This program covered areas such as: woodworking, ceramics, jewelry making, simple electric wiring, food preparation, and photography. Mayfield Hall currently houses our Student Health Center and our support services. 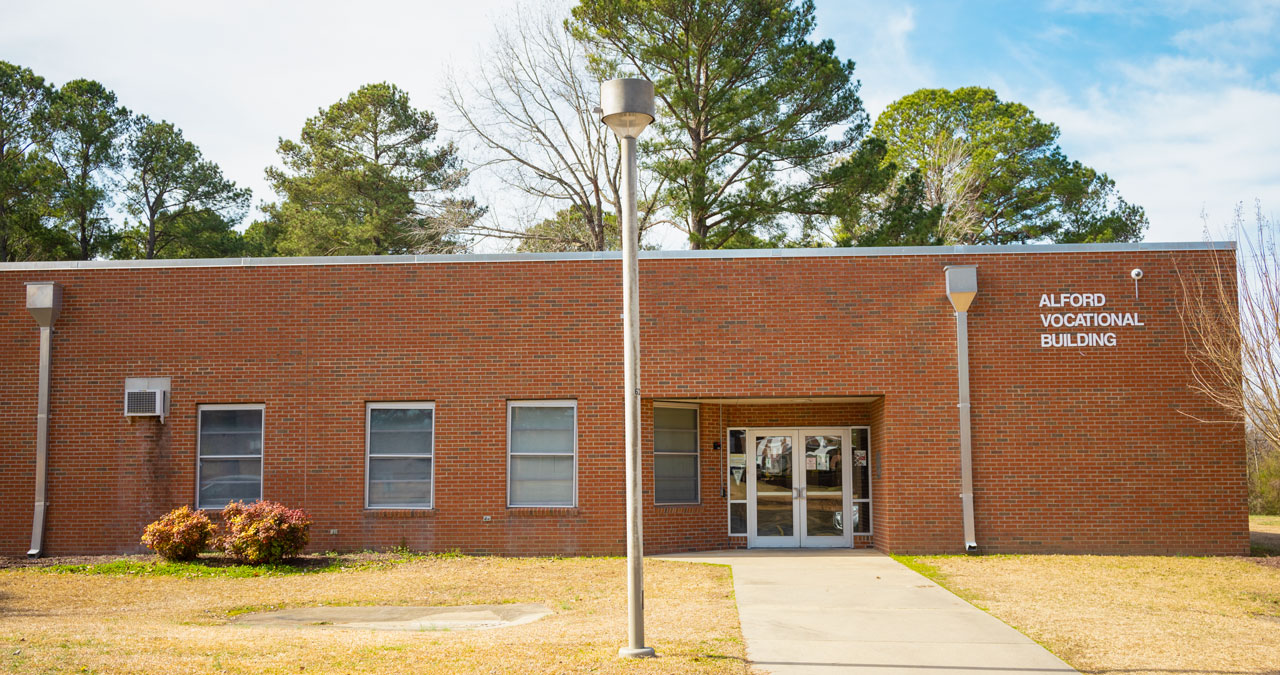 Alford Building was named after Senator Dallas Alford who advocated for the establishment of a high school program at the ENCSD. Alford Building was constructed in 1982 in order to become the new home of the vocational program. To this day, the vocational program offers classes such as auto shop, digital media, horticulture, carpentry, welding, food and nutrition, and masonry. It also houses the Occupational Course of Study program which helps prepare students for the workforce.

The original Vestal Hall that was built in 1943 was renovated in the winter of 2006 to become an updated independent living center. The original building was gutted and everything was replaced, including the roof. The new Independent Living Center is a two story, apartment-style dormitory. It includes a handicapped accessible apartment on each floor, an elevator, a laundry room, a full teaching kitchen, a formal dining room, and a courtyard patio.